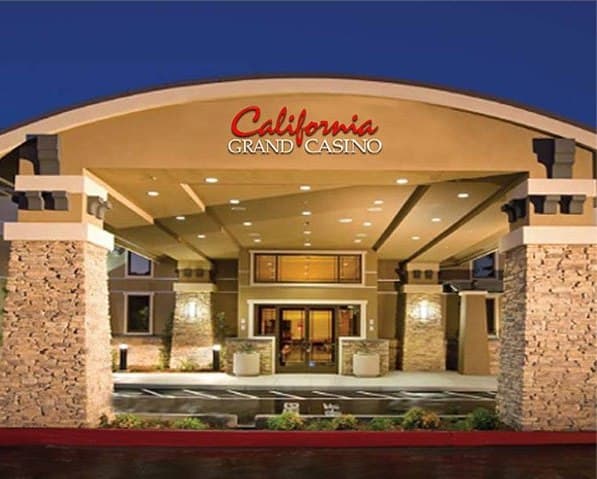 Our well-lighted facility and parking lots provide a safe, secure environment for our guests. Security officers are on duty 24 hours a day.

Drop in anytime. It’s “Where Friends Come to Play,” and the action is hot every day!

We are truly “Your BEST BET in the Bay Area!”

In jackpots and prizes. Our popular Progressive Bad Beat Double Jackpots start at $140,000 and increase daily.

If you prefer table games, we feature: Hot Action Blackjack and Three Card poker which offer bonus bets that allow players a chance to win up to 200 or 1000 times their wagers; Commission-free EZ Baccarat with the optional Dragon and Panda bets that pay 40 and 25 to 1; and Pai Gow Poker.

ACCORDING TO CARD PLAYER MAGAZINE

The California Grand Casino is the oldest continuously operating poker room in the world, with poker games since 1854.

It all started when the Woodford Hotel and Saloon opened its doors to offer alcohol and gambling. The hotel became a stagecoach and Wells Fargo Pony Express Stop, drawing even more people to the action. As the call of the Gold Rush Days began to fade, the hotel was renamed the Pacheco Inn.

In 1979, Lamar “Wil” Wilkinson purchased and improved the property, then changed the name to the California Grand Casino.

Our new facility opened in July 2009 and is located at 5988 Pacheco Blvd, directly across the street from the original location. The new location has many upscale amenities such as a large comfortable gaming area with 19 tables, 25 wide screen HD TV’s, additional seating in the lobby, a full bar, free wireless access and a sit down restaurant, The Grand Cafe; serving breakfast, lunch and dinner. And there is ample parking, free Valet Service and the entire casino is SMOKE FREE!

For seven years in a row, the California Grand Casino has been voted Best Casino and Best Local Gaming in the San Francisco East Bay by the Bay Area News Group, which includes the Contra Costa Times, San Jose Mercury News and the Oakland Tribune.

The casino is open 24 hours a day, year-round, providing customers fast-paced card-playing action. The poker games here are considered by many to be the most action packed in the Bay Area. Personnel are friendly and well trained and our poker staff is considered to be the best in Northern California.

MUST BE 21 YEARS OR OLDER

CALL 1-800-GAMBLER or Contact the Office of Problem Gambling

Our restaurant is temporarily closed. We will be offering outdoor food service for gaming customers and employees when we re-open.

Or to be added to our email list, email us at admin@californiagrandcasino.com

No purchase necessary for High Hands, Jackpots, Royal Flushes and Splash Cash.  Site may not reflect current Jackpot and prize amounts.  See Promotion pages for additional details. We reserve the right to modify or cancel promotions at any time.

We may request cookies to be set on your device. We use cookies to let us know when you visit our websites, how you interact with us, to enrich your user experience, and to customize your relationship with our website.

Click on the different category headings to find out more. You can also change some of your preferences. Note that blocking some types of cookies may impact your experience on our websites and the services we are able to offer.

These cookies are strictly necessary to provide you with services available through our website and to use some of its features.

Because these cookies are strictly necessary to deliver the website, refuseing them will have impact how our site functions. You always can block or delete cookies by changing your browser settings and force blocking all cookies on this website. But this will always prompt you to accept/refuse cookies when revisiting our site.

We fully respect if you want to refuse cookies but to avoid asking you again and again kindly allow us to store a cookie for that. You are free to opt out any time or opt in for other cookies to get a better experience. If you refuse cookies we will remove all set cookies in our domain.

We provide you with a list of stored cookies on your computer in our domain so you can check what we stored. Due to security reasons we are not able to show or modify cookies from other domains. You can check these in your browser security settings.

These cookies collect information that is used either in aggregate form to help us understand how our website is being used or how effective our marketing campaigns are, or to help us customize our website and application for you in order to enhance your experience.

If you do not want that we track your visit to our site you can disable tracking in your browser here:

We also use different external services like Google Webfonts, Google Maps, and external Video providers. Since these providers may collect personal data like your IP address we allow you to block them here. Please be aware that this might heavily reduce the functionality and appearance of our site. Changes will take effect once you reload the page.

The following cookies are also needed - You can choose if you want to allow them: