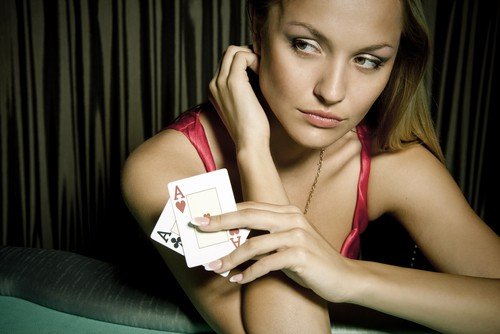 You are looking for some of the same poker tells we talked about in our first article about Pre-flop poker tells, but now your initial focus is on the other players’ reaction to the board.  Do they stare at the board trying to make sense of it or do they look at the flop quickly and then look away because they connected (just as pre-flop a player with a good hand will look at their hand quickly then put it down)?  Are they touching their chips?  Are they shaking their heads or did they talk because they just can’t get any luck or help?  Are they relaxed or tight when and after they bet?  Are any of the players acting differently than normal?

Think about how long they take to act.  In no limit Texas Hold ‘Em, a value bettor on the river may take more time determining whether to bet and how much.  A bluffer may act faster.  While pausing may be a sign of a value bet, someone who checks slowly at any point may want you to think they have a stronger hand than they do and needed more time to decide.  However, in limit Texas Hold ‘Em poker many players find less reason to be deceptive and these indicators can change.  A quick bet may be stronger.  A quick call may indicate a drawing hand or a weak kicker.

Also pay attention to how your opponents place their poker chips in the pot when betting and calling.  Do they count out the chips deliberately?  Do they drop a pile out haphazardly, or place them down carefully.  How much force do they use to put the chips down?  For some players excess force when betting can indicate a bluff.  Regardless, you are looking for a relationship between how they act and what hands they show.

Lastly, remember to consider the players who have already folded their cards.  If two 5s come on the flop and a player who folded pre-flop grunts or makes a face, they may have folded one of the remaining 5s.  You can use this tell to narrow your opponent’s range.

Well, the small blind clearly has a hand.  He usually folds on the river when he misses, but here he quickly shoved.  If he thought you were bluffing or he had only a straight, he may have paused longer before he folded or called.

So with this board there are a few possible strong hands: quad 9s, quad 6s, and full houses: 9s over 6s, 9s over 8s, 8s over 6s, 6s over 9s or 6s over 8s.  You have the fifth best of these hands.  Your first thought might be that you are in danger, but then you start running through his possible hands.  You are pretty sure another player folded a 9, so that rules out quad 9s.  That also means that the chances of 9s over 8s or 6s is less since there is only one 9 not accounted for.  So even though there are four hands that beat you, the odds of the small blind having a six is higher than the odds of him having two 6s or one 9.  You put this information together with your read of the small blind’s play , then you call.  The small blind turns over a K 6 suited.

Don’t forget to watch the other players, even the ones who already folded.  Players who have already folded generally aren’t trying to hide anything, and you may get a good read on what they folded which will help you narrow your opponent’s range.  When you are playing Hold ‘Em every bit of information can help.  The California Grand Casino is a great place to improve your poker play and win in the Bay Area.