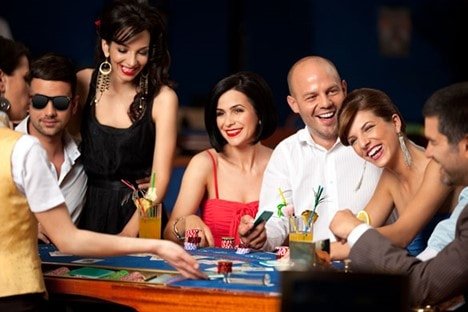 California cardrooms have evolved from the old western saloons of the Barbary Coast to modern casinos while keeping the basic idea that players have the chance to play card games against each other.

In the old west, saloons had card tables where players could play card games against each other, with the players taking turns being the dealer.  The California Grand Casino has been offering games like this since it was a Pony Express Stop in the 1850s.

In 1872, California prohibited “banked” card games, usually understood to mean games where the players play against the house. For more than 100 years after that, regulation of cardrooms was left to local governments.  At one point, there were over 300 card rooms operating in the state.

In the early 1980s, cardrooms also began to offer non-banked versions of card games such as Pai Gow Poker, which was invented at a cardroom in Los Angeles.  In these games, players could take turns playing the dealer hand against the other players. While casinos of the type operating in Nevada and New Jersey are not allowed in California, the California courts determined that these “player-dealer” games where the players can wager against each other are legal.  As a result, a unique structure took shape in California.   The cardrooms supply the dealer, tables, chips and cards.  And at least every two hands, the player-dealer position is offered to a different player.  There also are independently owned companies whose employees take the player-dealer position when it’s offered.  But every player at the table still has the right to take the player-dealer position and bet against all the other players. In 1997, the Gambling Control Act was adopted, which created the California Gambling Control Commission to regulate California cardrooms and it now also regulates these third party companies.

Today cardrooms exist in a special place for most Californians.  The laws create a fun, competitive gaming atmosphere that is separate and distinct from a casino.  As one player who travelled from out of state said: “At first, I thought it was strange having the dealer position offered around, but when I realized I could bet on the dealer hand and enjoy the odds, I loved it.”

What’s The Difference between a California Cardroom and a Casino?

Unlike tribal or commercial casinos, cardrooms do not offer slot machines or video poker.  But in addition to poker and Texas Hold’Em, they offer cardroom versions of newer card games like Blackjack, Baccarat, Three Card Poker and Pai Gow Poker.  In these games, each person has the opportunity to wager on the dealer hand against the other players, rather than betting against the house.

How Many Cardroom are there in California?

Today, there are 66 cardrooms operating in California ranging in size from one table to nearly 300 tables, offering many of the same games played all over the world, and hosting tournaments and events.

When you arrive at the California Grand Casino, we’ll greet you, ask you what game you want to play, and help you find you a seat.  We can explain the games to you.

New players also receive special bonuses.  If you want to play poker, you can buy in for $20 and receive $50 in chips.  For the player-dealer games, you will receive Four $10 Match Play Chips and $10 in free food on your first visit, with the same again when you return a second time.  You can take both the poker and Match Play bonuses on your first visit.  Come in and see why the California Grand Casino has been voted best casino in the East Bay for seven years in a row.

MUST BE 21 YEARS OR OLDER

CALL 1-800-GAMBLER or Contact the Office of Problem Gambling

Our restaurant is temporarily closed. We are offering food service for gaming customers and employees.

Or to be added to our email list, email us at [email protected]

No purchase necessary for High Hands, Jackpots, Royal Flushes and Splash Cash.  Site may not reflect current Jackpot and prize amounts.  See Promotion pages for additional details. We reserve the right to modify or cancel promotions at any time.

We may request cookies to be set on your device. We use cookies to let us know when you visit our websites, how you interact with us, to enrich your user experience, and to customize your relationship with our website.

Click on the different category headings to find out more. You can also change some of your preferences. Note that blocking some types of cookies may impact your experience on our websites and the services we are able to offer.

These cookies are strictly necessary to provide you with services available through our website and to use some of its features.

Because these cookies are strictly necessary to deliver the website, refuseing them will have impact how our site functions. You always can block or delete cookies by changing your browser settings and force blocking all cookies on this website. But this will always prompt you to accept/refuse cookies when revisiting our site.

We fully respect if you want to refuse cookies but to avoid asking you again and again kindly allow us to store a cookie for that. You are free to opt out any time or opt in for other cookies to get a better experience. If you refuse cookies we will remove all set cookies in our domain.

We provide you with a list of stored cookies on your computer in our domain so you can check what we stored. Due to security reasons we are not able to show or modify cookies from other domains. You can check these in your browser security settings.

These cookies collect information that is used either in aggregate form to help us understand how our website is being used or how effective our marketing campaigns are, or to help us customize our website and application for you in order to enhance your experience.

If you do not want that we track your visit to our site you can disable tracking in your browser here:

We also use different external services like Google Webfonts, Google Maps, and external Video providers. Since these providers may collect personal data like your IP address we allow you to block them here. Please be aware that this might heavily reduce the functionality and appearance of our site. Changes will take effect once you reload the page.

The following cookies are also needed - You can choose if you want to allow them: